With less than a few weeks to go from the arrival of our twins, my husband and I took a fantastical baby moon. For ours, we decided to go somewhere neither of us had been to but longed to explore. We quickly decided on Japan—to have our very own Lost in Translation moment with a lot of art, sightseeing and sushi. For our final four days, we took in Tokyo three ways, by walking tour, biking tour and self-guided exploration.

Check-in and dip in

After experiencing islands in Japan’s Seto Inland Sea, and many planes, trains, automobiles and ferry rides, we arrive at Aman Tokyo. After checking in and getting settled into our room, we decided we absolutely needed to visit the pool. It’s not just any pool, rather a light-filled 30-metre pool with panoramic city views. 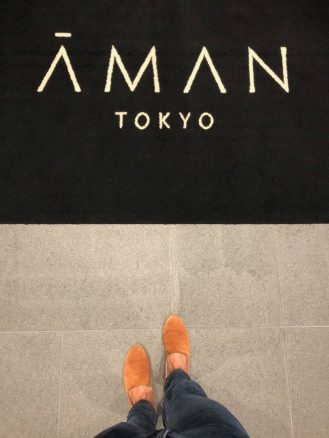 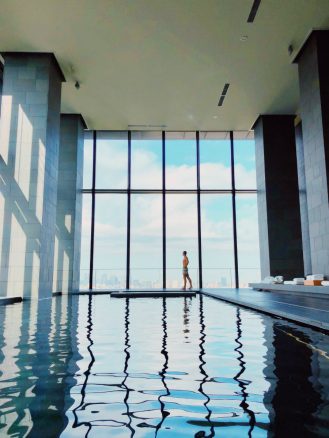 The dip was divine. Once dried off, we headed out to a nearby sushi spot, recommended by Aman’s concierge before heading off to bed. We had a lot of ground to cover in the next three days, so we needed to rest up! 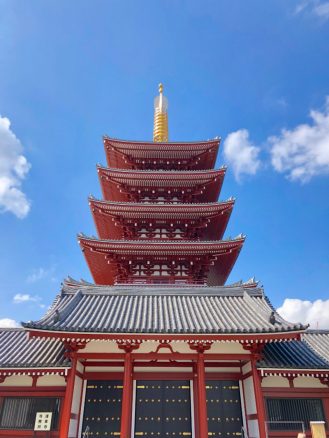 For this trip, we decided not to have an intense itinerary, yet we still wanted some structure, so we opted for a walking tour on the first day. Our guide was tremendous, as he took us through so many of the city’s iconic attractions, including the Asakusa Shrine, Imperial Gardens, Harajuku, Shibuya and Roppongi Hills. Though many signs in Tokyo are in English and Japanese, it’s still extremely helpful to have an English-speaking guide show you how to navigate the city and point out key sights.

Our guide also knew where to find super random things, such as a place that makes your face into latte art! He also did us the (constant) favor of snapping photos. Like the tourists that we are, we insisted on getting that obligatory shot of us traversing the famous Shibuya Crossing. It was complete madness! 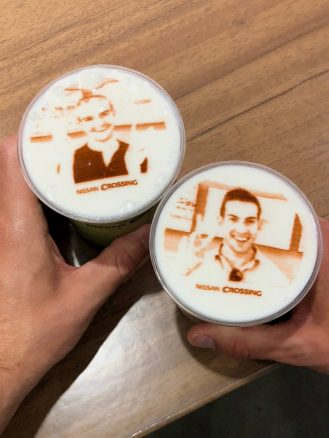 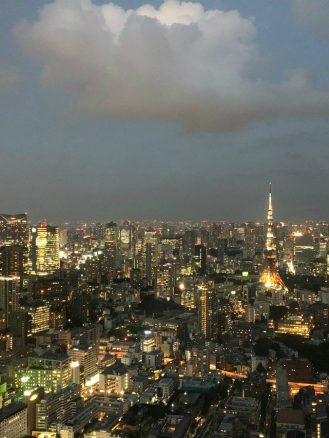 To wrap the day, our guide took us to the Roppongi Hills Mori Tower, which has the most beautiful panorama of the city.  It includes two observation decks—one indoors and outdoors up on the 54th floor. Needless to say, we were absolutely famished after a day of trekking across Tokyo. To satiate ourselves, we took our concierge’s recommendation to indulge in sushi at Sushiko Honten Marunouchi Building. This sushi restaurant is rich in history—129 years of it! Our chef told us that he’d been working there for 31 years.  It’s not often you dine somewhere with more than a century’s worth of happy customers.

For our second day, we took it up a notch with a bike tour. We took one years ago during a trip to Barcelona and loved it, so I was excited to do it again in Tokyo. Through the bike tour, we happily returned to the Imperial Gardens. It is incredible to think that an Imperial Palace is nestled within the city. 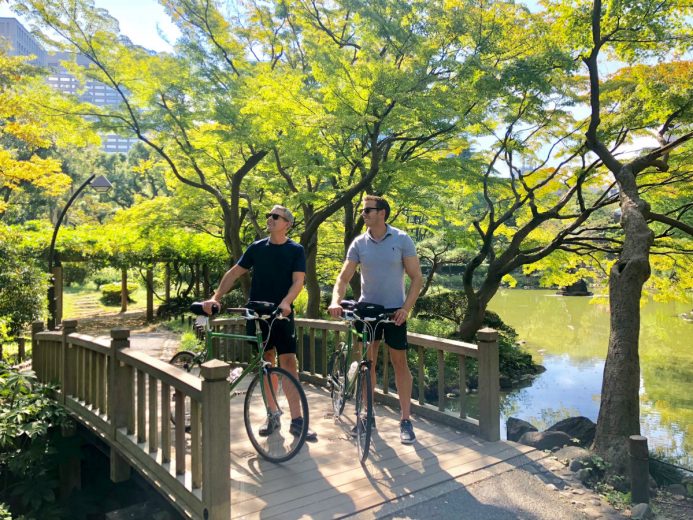 Once back at the hotel, we indulged in some spa services. Aman Tokyo’s Spa is not just a service, it’s a journey. 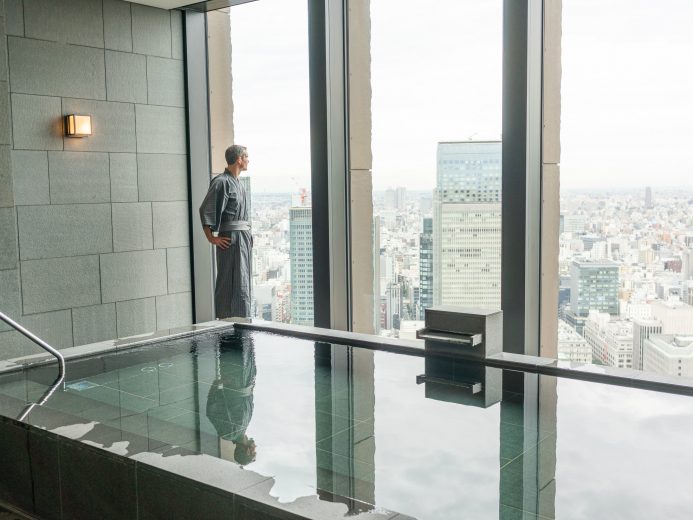 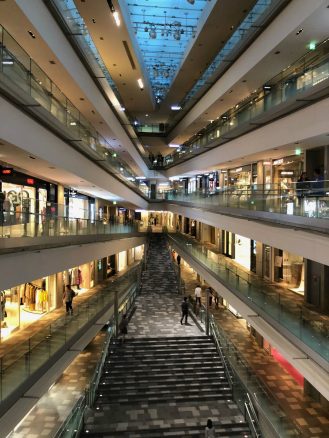 On our final full day in Tokyo, we decided to go it alone and make our own adventure. I think we both thought Tokyo would be difficult to navigate as non-Japanese speakers, but this proved to be untrue. The subway is orderly and organized in such a way that it’s pretty hard not to understand how it works, and everything is also in English.

The big discovery of the day was an incredible mall filled with luxury brands and products that neither of us had ever seen before. Normally, I would steer clear of a mall while taking in a new city, but in Tokyo it was somehow different. The high-end stores of the Omotesando Hills are mostly Japanese and feature clothes and goods you just cannot find in the Western world. 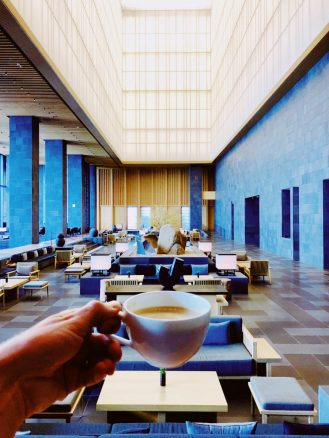 For our last night, we had to do it up! And by up, I mean we went to the New York Bar on the 54th floor of the Park Hyatt Tokyo  tower. This restaurant bar is definitely a beautiful place to take in breathtaking views of the city. However, a fun fact about this particular place is its role in Sofia Coppola’s Lost in Translation. Much like Bill Murray’s character in the film, Jeff and I enjoyed the scene while listening to jazz and sipping cocktails. It was the perfect way to end a tremendous trip.

Before departing the following morning, we enjoyed breakfast at the Aman and took in its impressive design one last time. 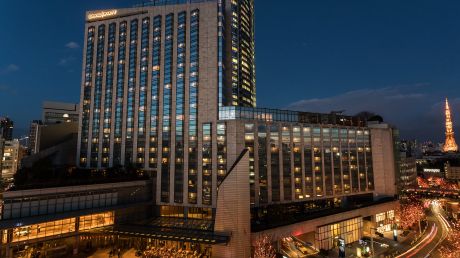 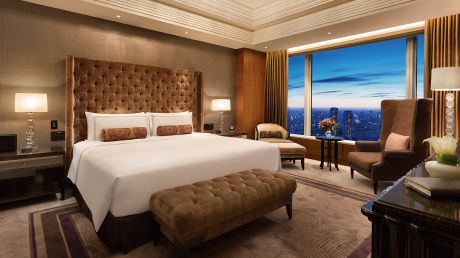 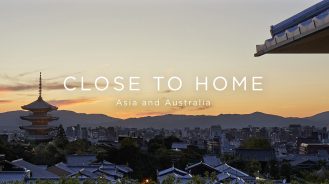 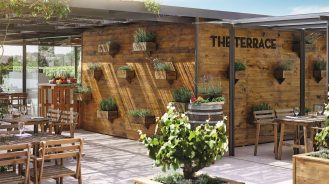 Where to Eat, Drink and Play When Spain Reopens